Holidays always include decorations.  The best decorations are ones that are handmade with love. Deck the halls with this festive tree garland that is worked as one piece and goes on as long as you have time and patience to make it.  The connecting cord is worked on the outside loom while the trees are worked in double knit. Five cheerful charts with skill levels ranging from beginner to medium depending on which chart is chosen is provided to pick and choose from to create your own holiday cheer.

Use 1 strand of 4 worsted weight yarn.

Use 2 strands together as 1 of 2 fine weight yarn.

Always insert the crochet hook in the stitch in the same direction in order to keep the bind off from getting twisted.

The chain is worked in single knit on the outside loom.  Trees are worked in double knit.

Sample worked with 12 trees.  Work as many or few trees with whichever charts desired.

Read chart from bottom to top and from left to right.  Work green in stockinette weave.  Work other colors in back to back weave unless the entire row is worked in the same color then work in SW.

Use ends to tie or otherwise secure garland.

If longer cords are desired on each end, work more pegs for the cord at the beginning and end of the project.

Tip:  Print off charts.  Mark off each row when worked for ease of reading.

Leaving a 6″ tail, CO the outside loom in single knit with grey using the chain CO method for 25 pegs. 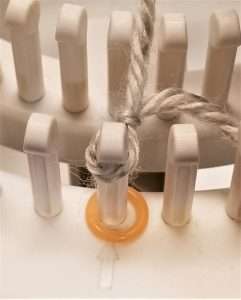 Begin the chain cast on by placing the slip knot on the first peg.

This picture is from the front of the loom. 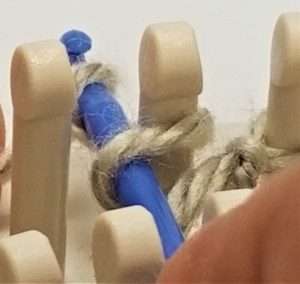 This picture is from the back of the pegs being cast on. 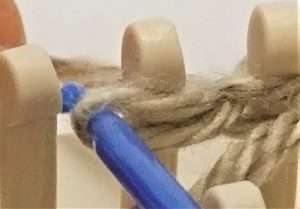 Pull the new loop behind the next peg.  Bring the working yarn to the front of the peg.

This picture is from the back of the pegs being cast on. 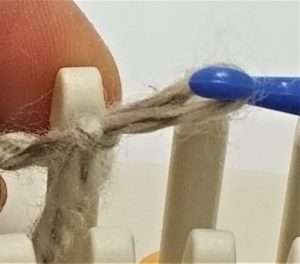 To bind off, place the loop from the first peg on the crochet hook. 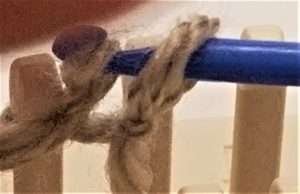 Place the loop from the next peg on the hook so there are 2 loops on the hook. 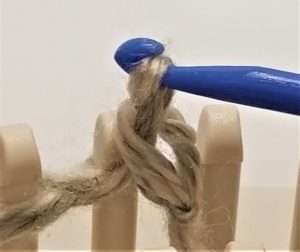 Pull the second loop through the first loop. 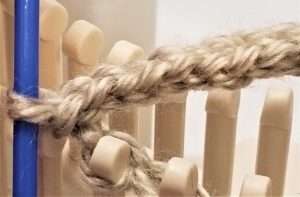 Repeat for each peg making a cord. 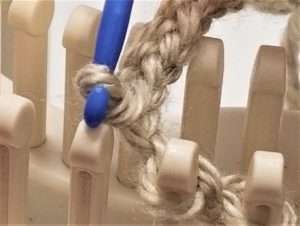 When the last stitch has been bound off, 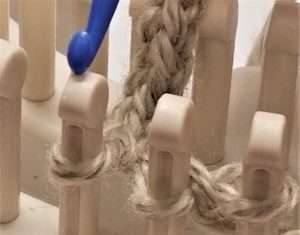 place back on the peg. 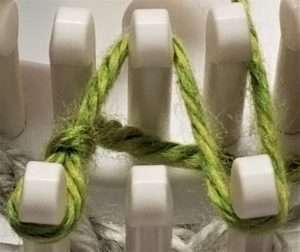 Wrap with the SW for 3 pegs. 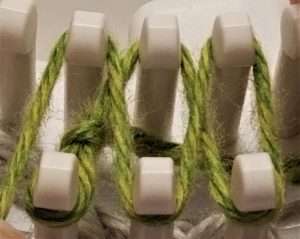 Return wrap so pegs have wraps on the front and back pegs. 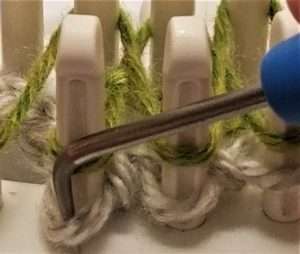 Knit over the outside rail. 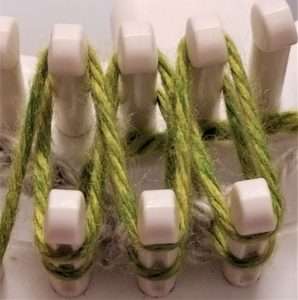 Wrap the 3 pegs in SW.  Knit over both rails.

Increase as follows when indicated on charts.

First BO the next cord stitch leaving an empty peg between the double knit work and the cord stitches. 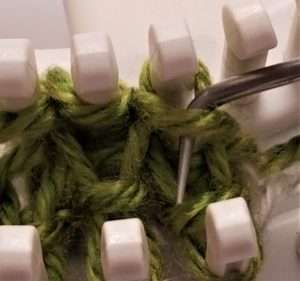 Lift the loop from the previous stitch that is behind the peg. 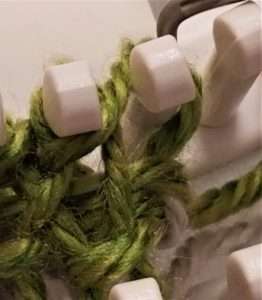 Move it over to the next empty peg. 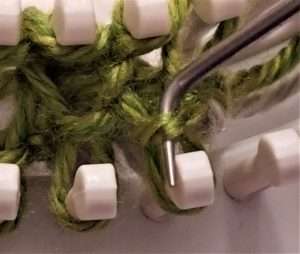 Increase the front peg in the same manner. 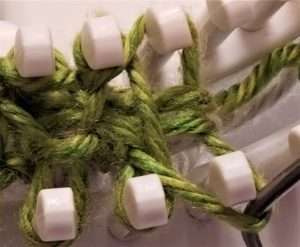 Move stitch over to empty peg. 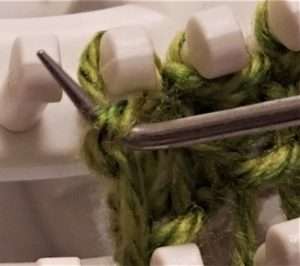 Work the other side in the same manner on the back peg. 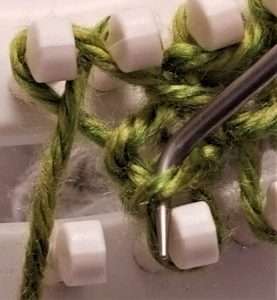 And then the front peg. 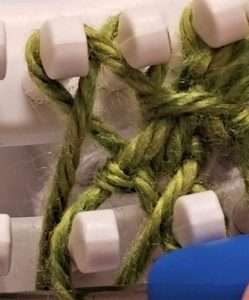 Place the new stitch on the next empty peg.

Each increase is worked on both sides increasing the work by 2 stitches.

When bottom of the tree is reached, BO as follows leaving 5 stitches for tree trunk/gift:

Place the loops from the back pegs on the last 4 stitches on each end on the corresponding front pegs.

Knit over so there are only 1 loop on each peg.

BO using the crochet BO method starting the end stitch working to the middle.  Repeat on the other side.

When tree trunk/gift is finished, BO as follows:

Place the loops from the back rail on the corresponding pegs on the front rail.

Knit over so there are only 1 loop on each peg.

*Work the cord by CO 23 more pegs, finish the cord by BO 15 pegs, then work the next tree.

Continue by repeating from * until number of trees or width is achieved.

Work the cord for 13 more stitches.

Sample worked with trees in the following order: 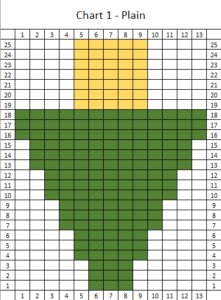 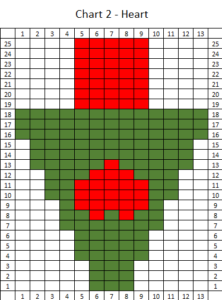 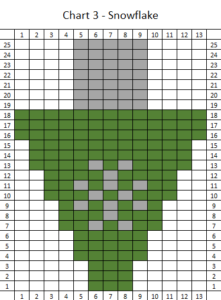 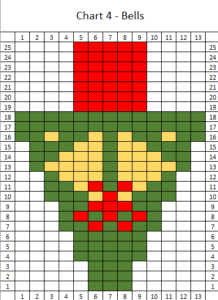 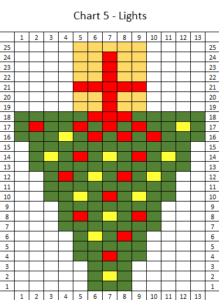 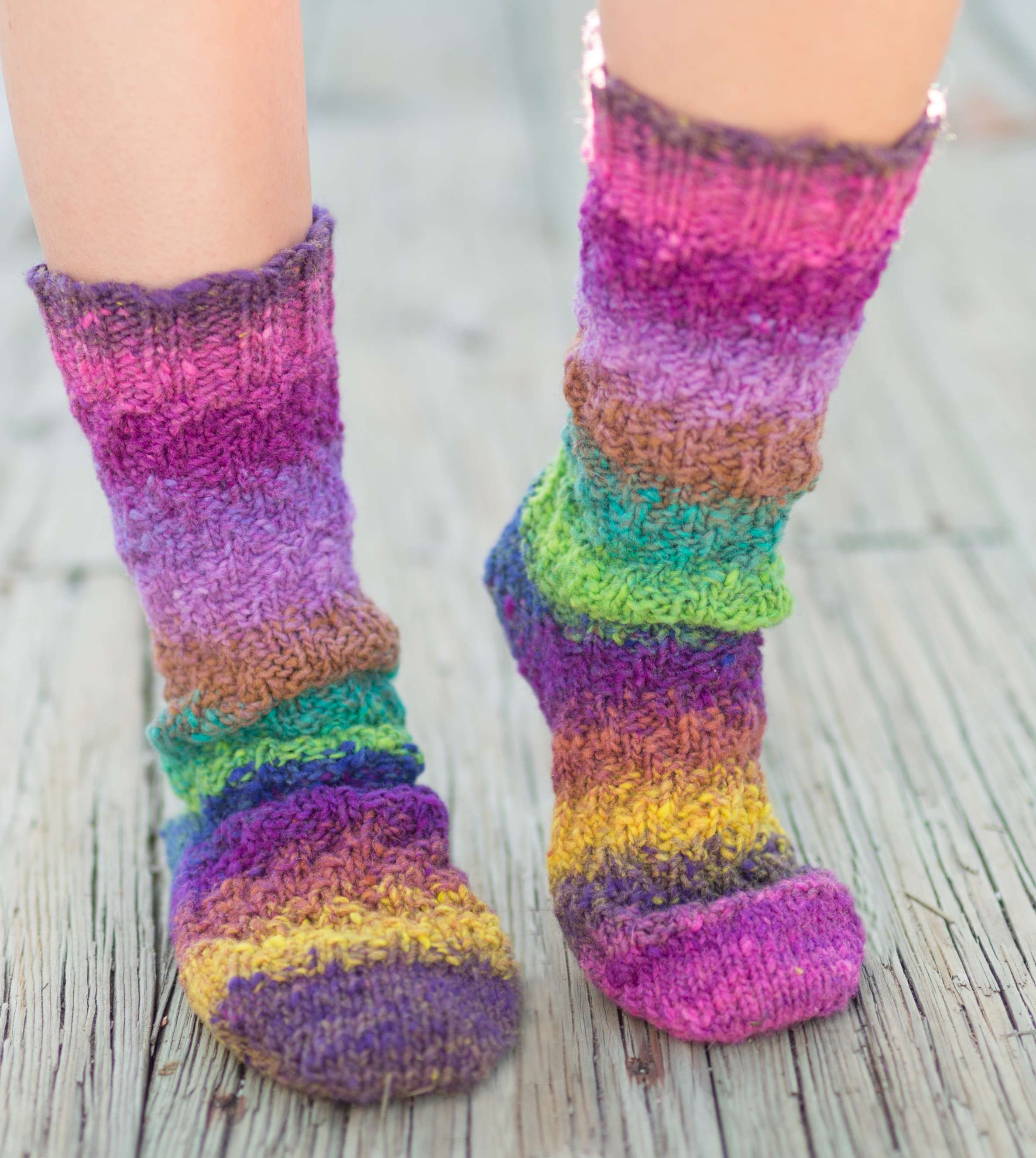 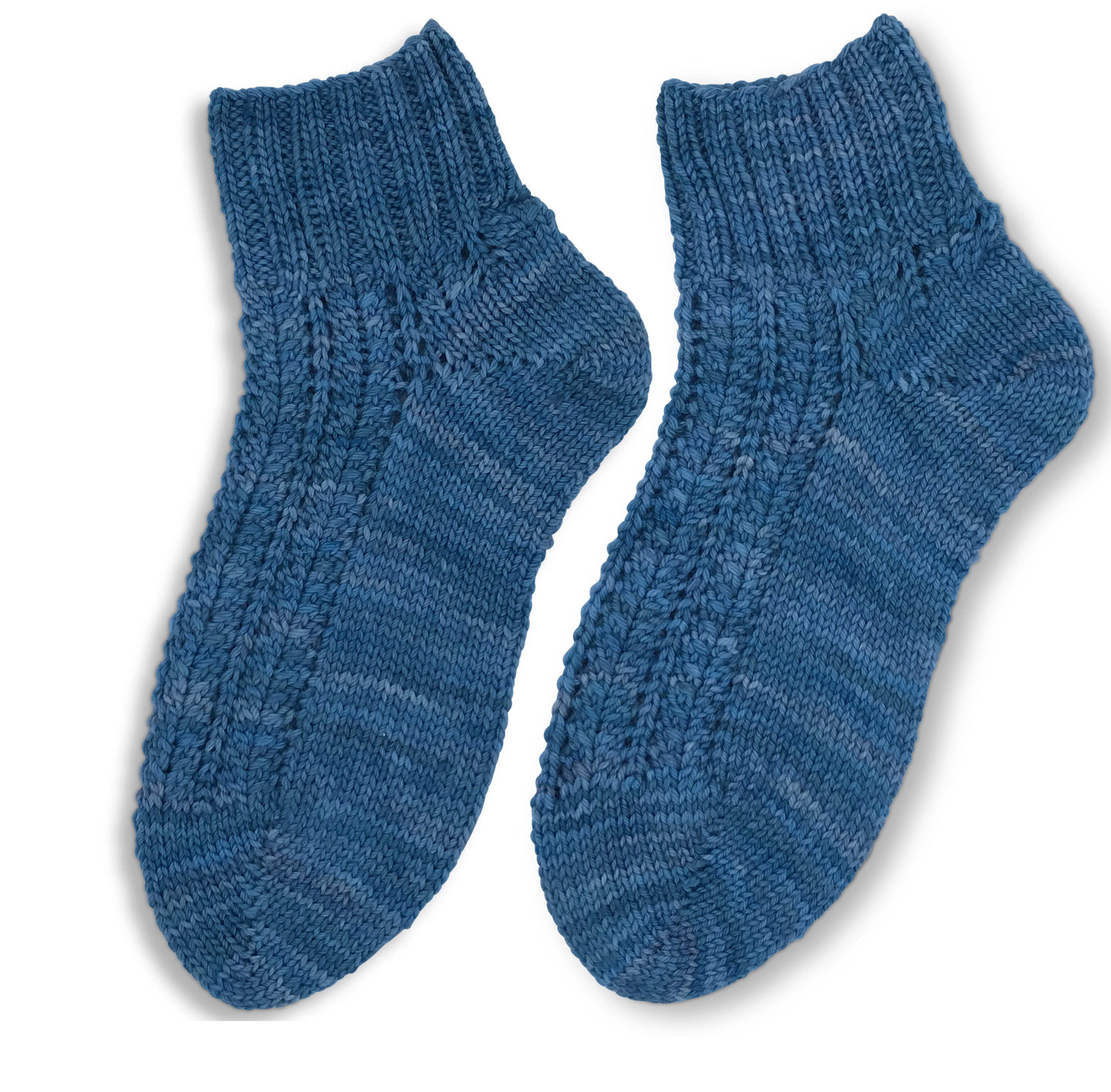 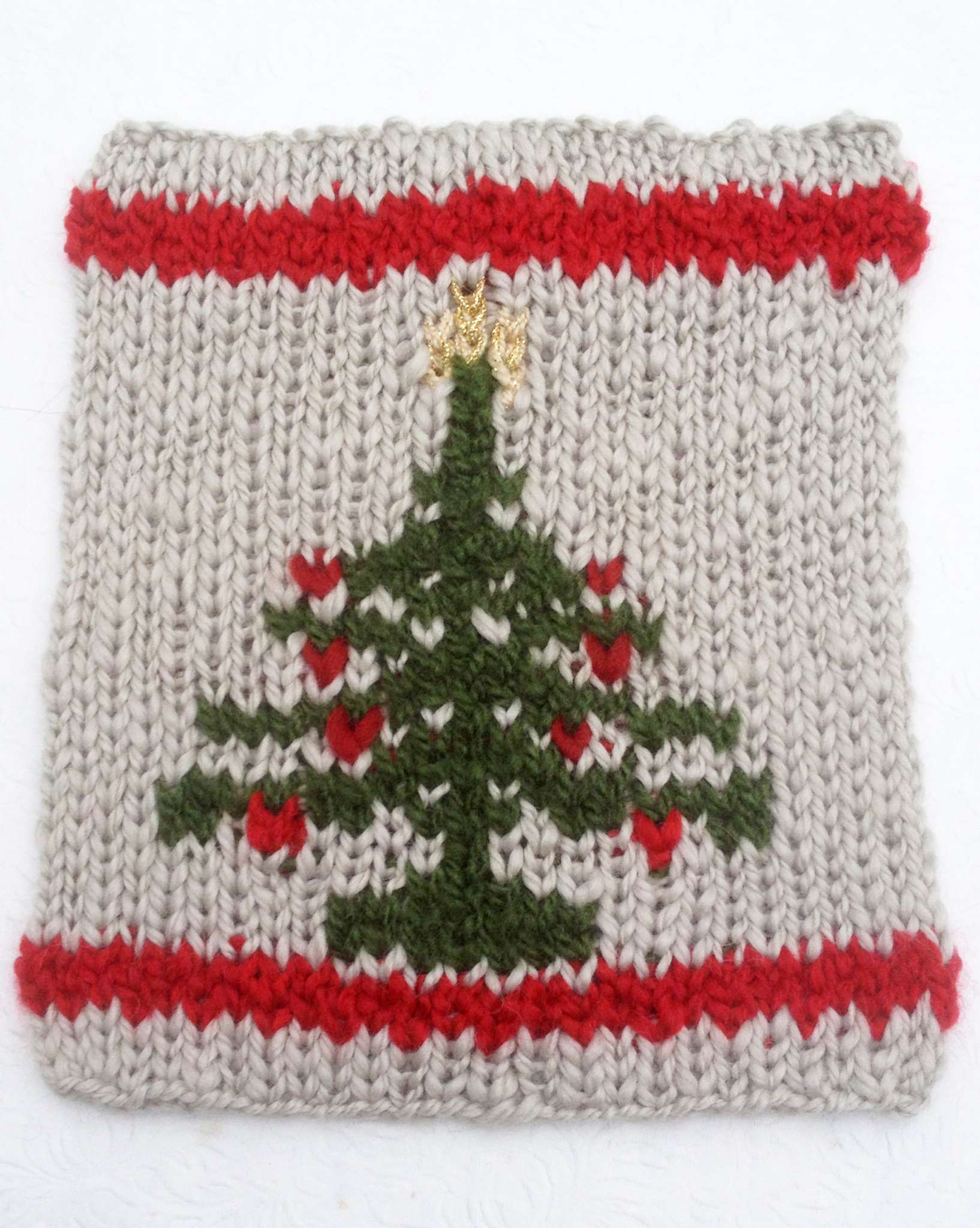 One thought on “Holiday Tree Garland”