There are always so many questions in the loom knitting world on social media.  Why is my bind off so tight?  How I can match my bind off to my cast on?  What is waste yarn?  How do I cast on and still have live stitches for grafting?

And while that one question at the first seems a bit off topic, all of the questions above do have the same answer.

That answer is using waste yarn to cast on.

What is waste yarn?

Waste yarn is just yarn of another color that is used to cast on and then used to knit the first few rows.

Why would I use waste yarn to cast on?

When waste yarn is used to cast on, the yarn that will then be used in the project can be added so that the waste yarn can be removed later.

Why would I want to remove the waste yarn?

While there are a lot of reasons to use waste yarn to cast on, there is only one main reason to remove the waste yarn after casting on.

That reason is to leave live stitches on the cast on end of the project.

What are “live stitches”?

Live stitches are the loops that are to be worked in knitting.  Generally speaking those are the stitches that are always on the pegs of the loom waiting to worked.  When binding off, those live stitches are being “closed” or ended so they will not run or unravel when the work is removed from the loom.

Why would I want live stitches on the cast on end?

There are a couple of very good reasons for wanting to have live stitches on the cast on end of a piece of work.

And both reason have to do with finishing the piece.

The first reason is so the work can then be placed back on the loom so that you can use the same bind off you used on the other end.  This is the best way to get both ends to match since they are worked in the exact same manner.

The second reason is so the cast on and bind off edges can be grafted together using the kitchener stitch to get a seamless join when making infinity scarves or other garments where you want to join but do not want a visible seam.

How do I work the provisional cast on so I get live stitches on the cast on edge to do with as my heart desires?

I am so very glad you asked!  Let’s get started!

There are 2 things you will need when working a provisional cast on.  Well 1 thing definitely.  The other is just very highly recommended by yours truly in order to make your life easier and meaningful…

You will need waste yarn and a life line.  While both of those are just yarn, I would like to make certain recommendations first.

When using waste yarn, you will want to use yarn that you will not be using again.  It does not need to be the same type of yarn you are using in the project.  If you are using high end yarn, please do not use the same for the waste yarn.  Why?  Well it IS called WASTE yarn for a reason.  You may be cutting it and most likely will not be able to reuse it so it becomes trash or waste.

I suggest using an inexpensive yarn that is a contrasting color.  You will want to be able to tell the difference between the waste yarn and the project yarn.

Life lines are just yarn in a different color as well.  But unlike waste yarn, you can reuse yarn that is used for lifelines.  Another suggestion is that the lifeline be a different color than the waste yarn AND the project.  This is so there is no confusion between the 3 different things.  I am one that tries my hardest to keep from being confused.  And my yarn is the one thing I have complete control over in my life.

If you are new to using lifelines in your work,  you can find more information in Loom FAQs  What Is a Lifeline?  The method that we will be doing here is adding the lifeline after the work is off the loom but the stitches that will be picked up are not the ones shown in the article.  More on that later. 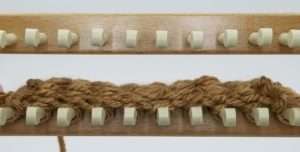 First we will cast on with the waste yarn.  Doesn’t matter what cast on you use.  I suggest using the simplest and quickest which is the wrap cast on.

Now we will work about 6 rows of knit.  Doesn’t matter which knit stitch you use on this part.  It doesn’t need to match the rest of the work since we will be taking it off

Now we cut our waste yarn leaving a short tail.  It is finished for this project. 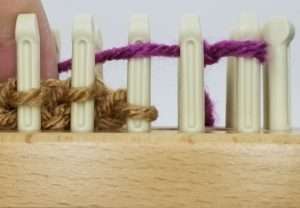 Add your project yarn in whatever manner you like when joining your yarn.

Here I have placed the slip knot on a neighboring peg so I can start knitting on peg 1.

The russian join is not a good one here since you still need that end.  You will want to leave a tail long enough to work whatever bind off or seaming technique you are planning on using when finishing the cast on edge later.

If you will be seaming with the kitchener stitch, leave a yarn tail about 1 and a half lengths of the pegs that are cast on.

If you plan on working the basic bind off, then you will want to leave a yarn tail at least 3 lengths of the pegs that are cast on.

You can simply put a slip knot on the first peg and then start working your pattern from here at row 1.

Or if you are like me and do not like knots in your work, just simply start row.  You do not need a knot or an anchor peg.  Just start knitting.  More on how to do that can be found in Loom FAQs:  Why Not Knots? 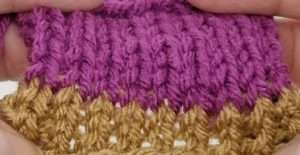 Continue until you are finished with your bind off on the other end.

If you are wanting to graft the 2 ends together, simply place a second lifeline through the stitches on the loom and remove it.  Unless you will be adding the cast on edge to the bind off edge and binding them off together.  Then just leave it on the loom… 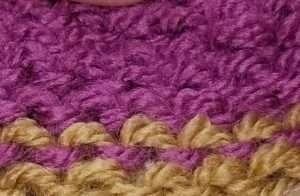 Turn the work over to see the back.

The first row where the project yarn can be seen are the stitches that will be picked up by the lifeline.

They are the ones at the bottom still in the beige stitches. 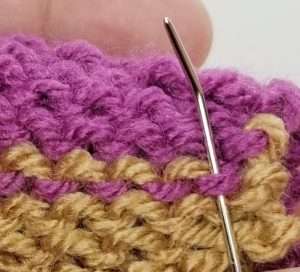 Thread the lifeline onto the tapestry needle 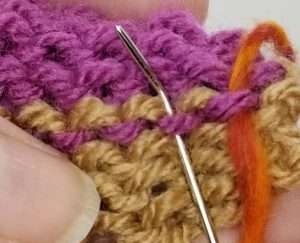 and run the needle through each of the loops until all are on the lifeline.

Since the lifeline has been placed, there is no need to fear dropped stitches.

Simply cut the work here on the waste yarn and then unravel the rest of the waste yarn until all that is left is the project with all the live stitches securely on the lifeline. 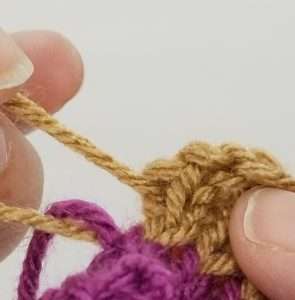 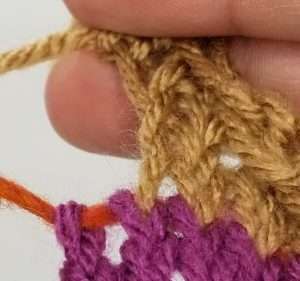 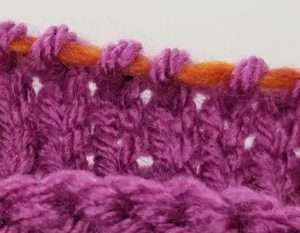 Now you are free to do whatever you please with those live stitches.

If you are wanting to bind off that end like the other end, simply put those stitches back on the loom and then bind off in the method of choice.

Well there you have it!  Waste yarn, the provisional cast on, and reasons why you would want live stitches on the cast on end.

Hope all your loom knitting projects have a happy ending! 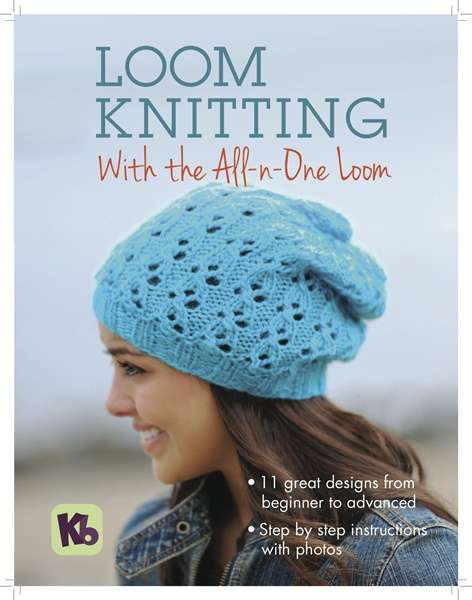 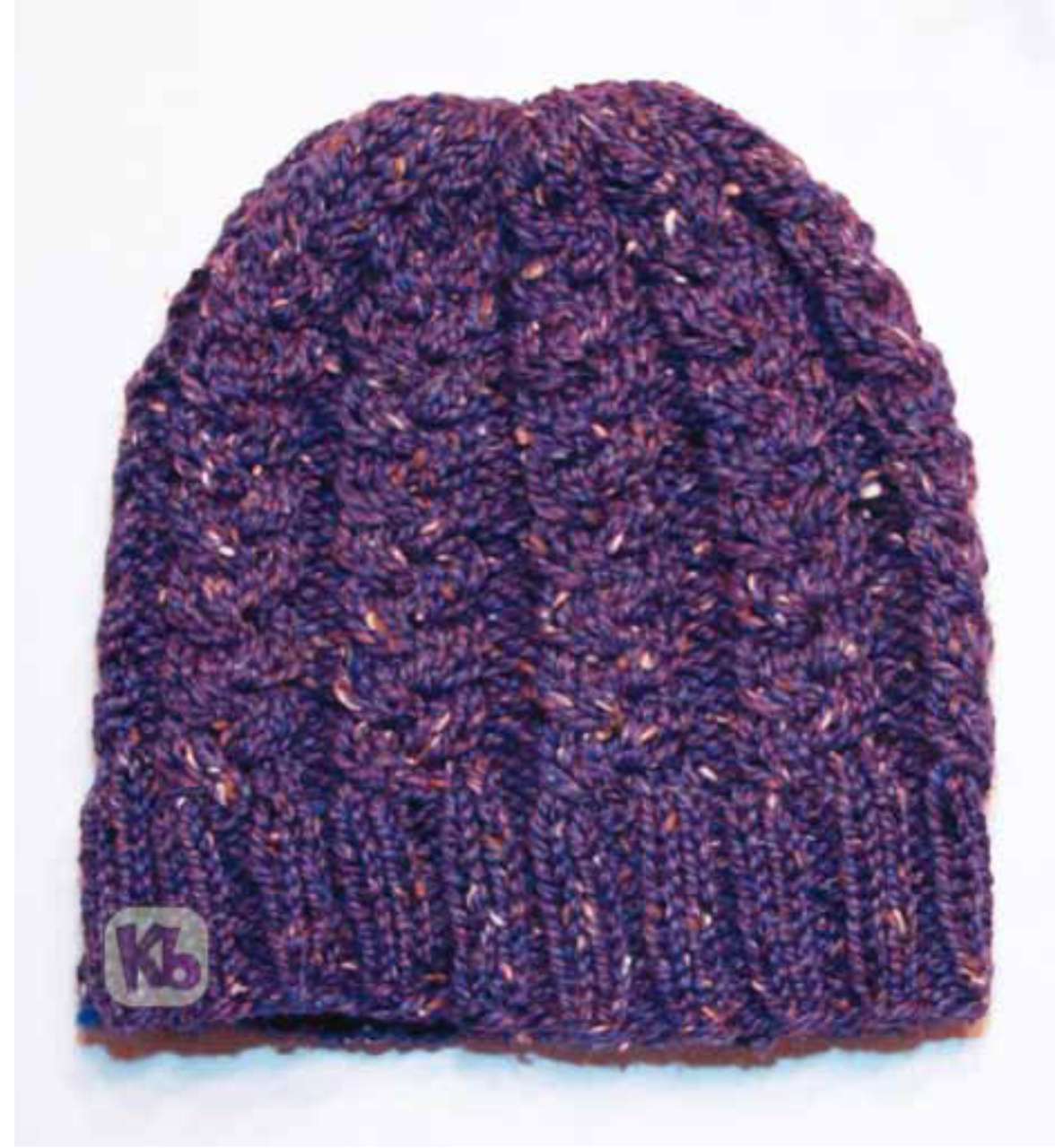 Loom FAQs: How Are Hat Brims Made?

2 thoughts on “Loom FAQs: What Is A Provisional Cast On?”