We have received many requests for how-to instructions and videos for the ‘rotating’ Double Knit Loom. Videos are in the works… stay tuned for those.

There are detailed instructions that come with the loom, but we will provide here as well. In this venue, we have the ability to make photos bigger, which can be really helpful. Also if you have questions about the process or the loom, you can ask in comments and get an answer quickly.
The process of knitting double knit ‘in the round’ is a bit different from double knitting on a straight loom or knitting board.  Actually the movement/ process is much easier…. no turning the loom to other side. You simply knit continuous in one direction around the loom. Simply rotate the loom as you weave, and hook over stitches; your knitting location stays in one spot.
In double knitting, you are using 2 pegs as one stitch, one peg on the outer loom,  and the peg directly across on the inner loom (stockinette).  After lots of testing, we found 52 stitches to be the ideal amount of stitches for an adult size hat.

Cast On (in the round)

IMPORTANT:  First thing, make sure the arrows on the inner loom and the outer loom line up. They are there so the peg spacing is in correct position.

1. To begin, start with a loop knot and put on the first peg on outer loom.  You can mark this peg with a stitch marker, or use the outer arrow.  Wrap the next peg on inner loom, to the R of arrow on inner loom. Wrap ‘every other’ peg, alternating from outer to inner loom. 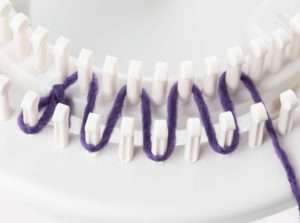 Keep going around the loom with same weaving, like above. When you reach the starting peg, wrap the adjacent peg (to left of starting peg) on the outer loom. Two pegs will be wrapped consecutively.

2. Then continue around the loom again in the same, ‘every other’ wrapping pattern. (Working the 2 consecutive pegs adjusts your weaving, so that now, you will wrap pegs skipped in the first time around loom).

Make sure, after working around loom (2 times), all pegs have one wrap. As you work, allow the loom to turn-no need to move the loom. 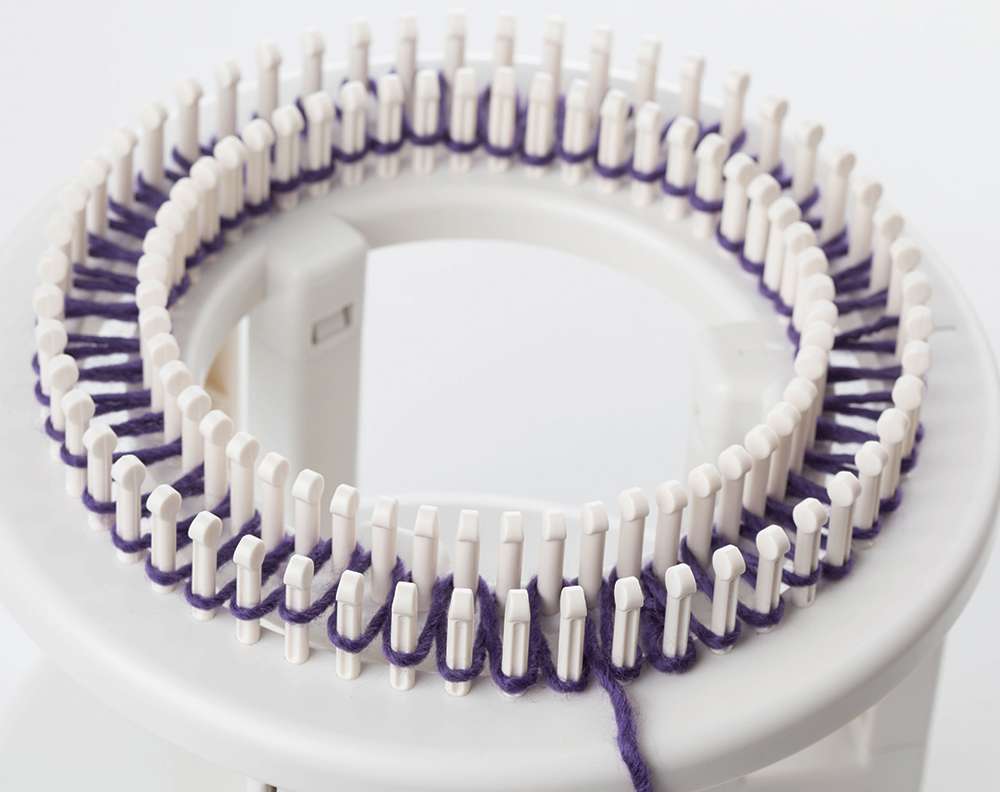 3. Now cut a piece of yarn approx. 35 inches long. Lay across stitches and around the loom between the inner and outer loom pegs (blue yarn) . 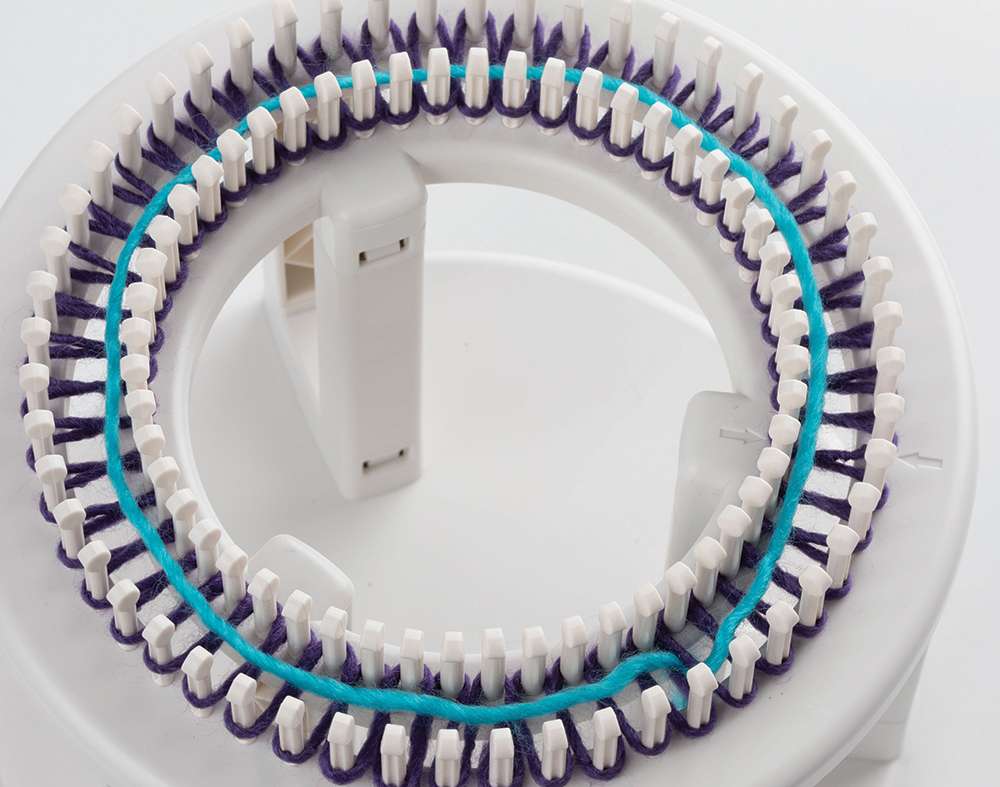 4. Repeat steps 1 and 2.  Wrap around the loom two times again, putting a second wrap on all pegs. Now, all pegs will have 2 wraps. 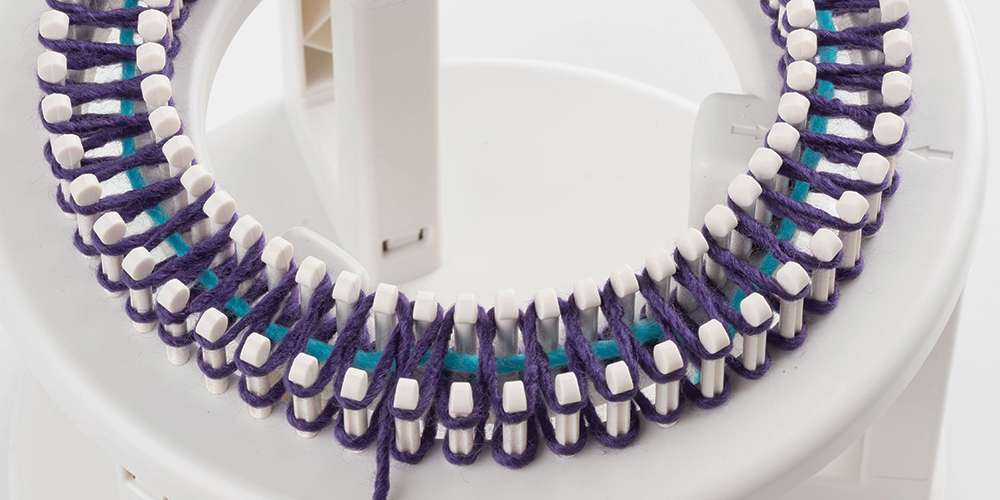 5. Hook over the bottom loop over the top loop on all pegs. Do this on both sides of the loom (front of the outer loom and back of the inner loom). Push sts down from top of loom after the row is hooked over.

Now the stitches are cast on. From the cast on row, continue in any stitch pattern. Stitches may seem to be loose for first few rows, but they will even up after you get further along in the knitting.

This stitch is worked with the same process as Stockinette Cast On. It creates a smooth even knit pattern.

Weave front to back, wrap the outer loom peg and then wrap the inner loom peg in same pattern as with stockinette cast on, skipping “every other’ peg. Wrap 2 times around the loom. 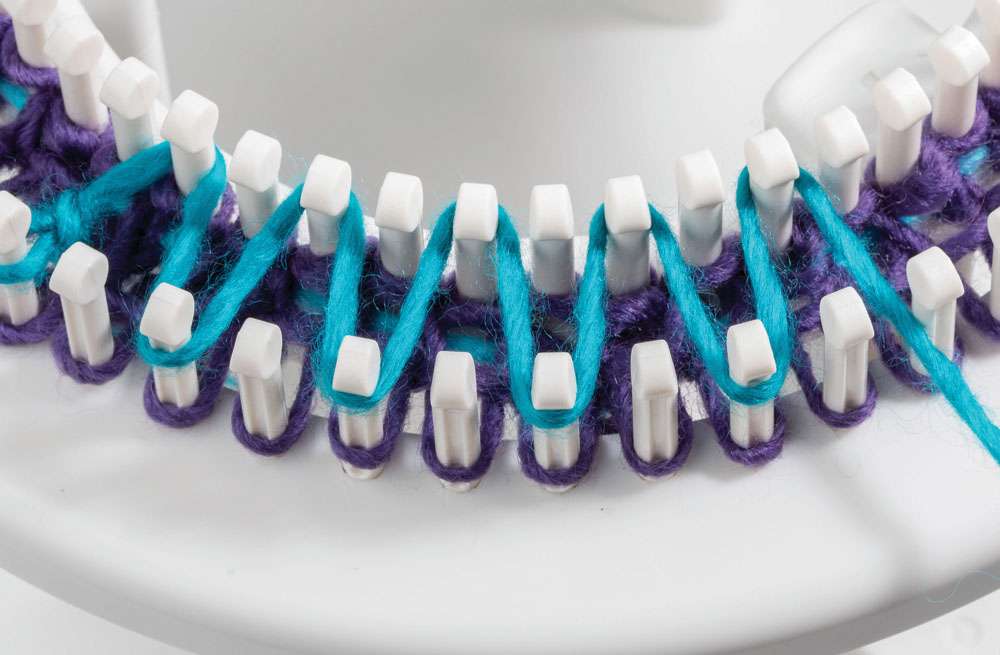 Then with knit hook, take bottom loop over the top loop on each peg. Simple repeat the above to create knit as long as desired.

This is a great stitch for hat brims, cowls or scarves. This stitch is similar to the stockinette, except it’s done at an angle. Work with even number of stitches.

Start from the starting peg on outer loom and wrap to the 3rd peg to R on the inner loom. Wrap that peg, and then back to the outer loom, keeping the ‘every other’ peg pattern. Wrap this peg.  This creates the angle for the ribbing stitch. 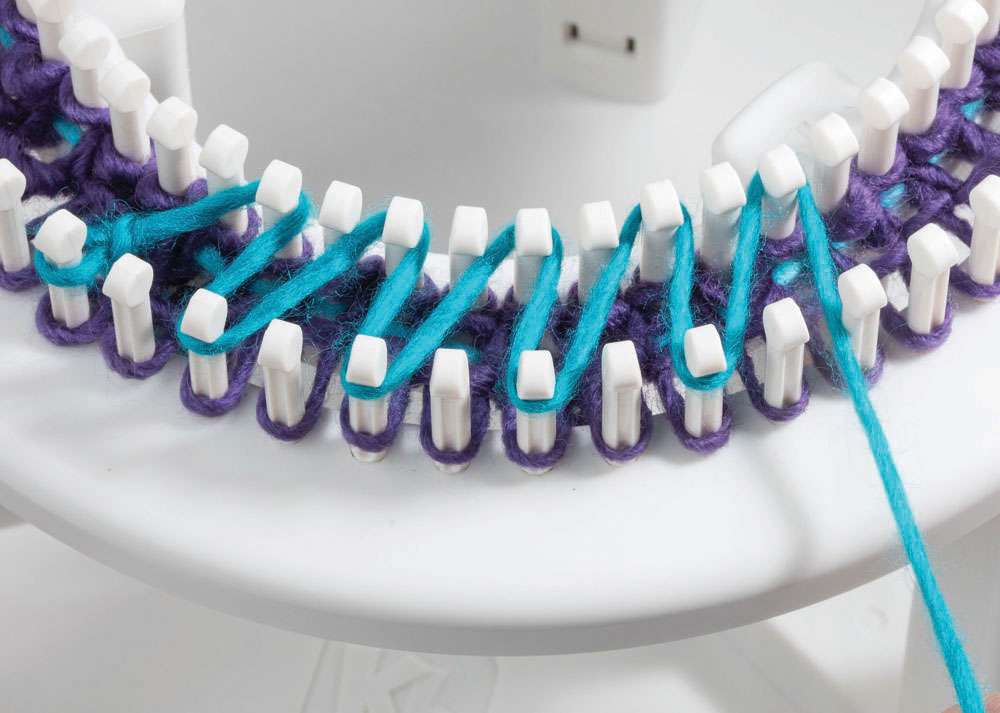 Continue around the loom, maintaining the angle with ‘every other’ peg, until you get to peg opposite the starting peg. Wrap this peg, the  peg on outer loom to left of starting peg (black arrow).  This creates 2 pegs wrapped consecutively on the outer loom. Do not wrap the starting peg. 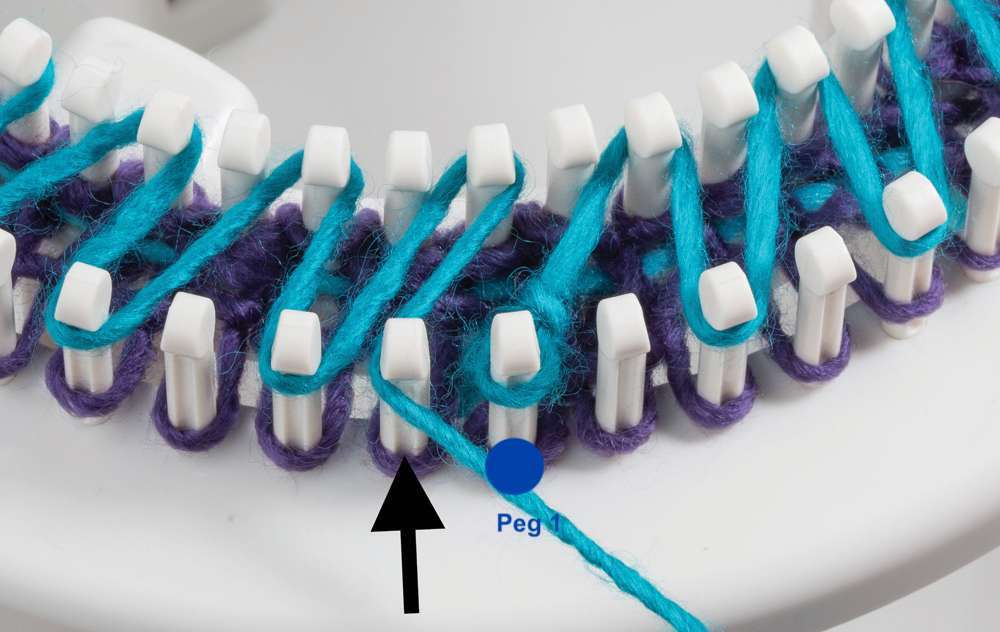 Now change angle and wrap the empty peg (black arrow) directly across on the inner loom. 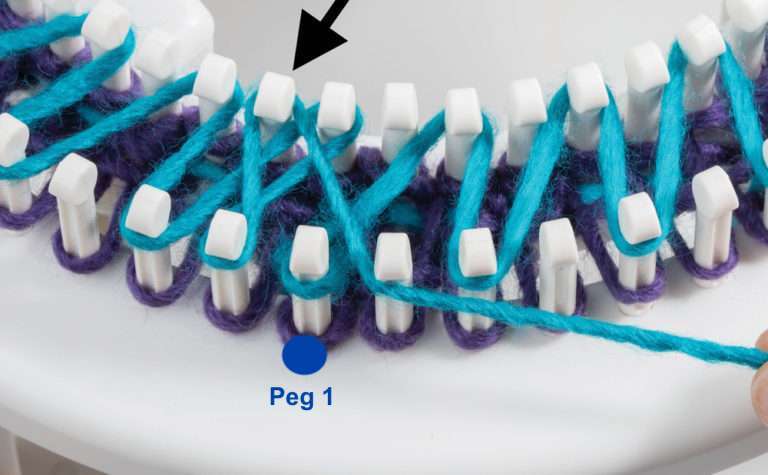 This is the return angle for the ribbing stitch and note, it is at an opposite angle from the first round.  This change of direction is what creates the ribbing. Continue around loom, until all pegs have one loop.  You will end with peg to L of starting peg on inner loom. This is how it should look… 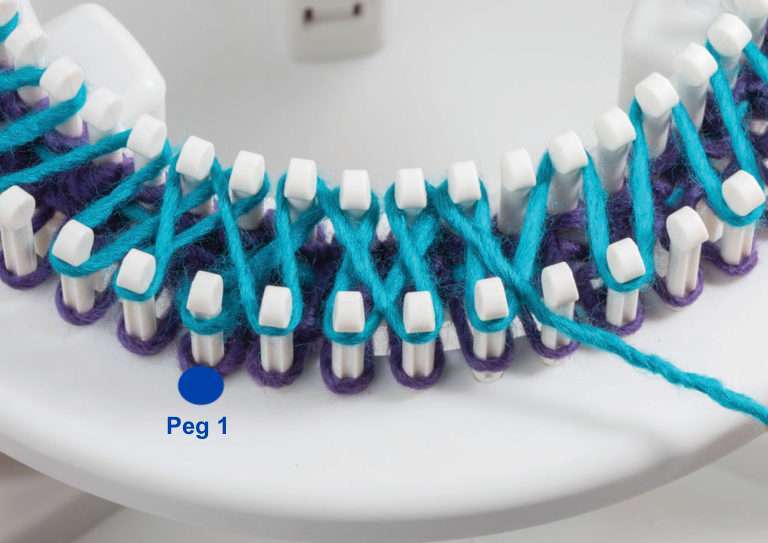 Hook over all pegs from outer loom, and then on inner loom. Push stitches down and continue steps for ribbing rows.

Gather Bind Off  (for Hats) 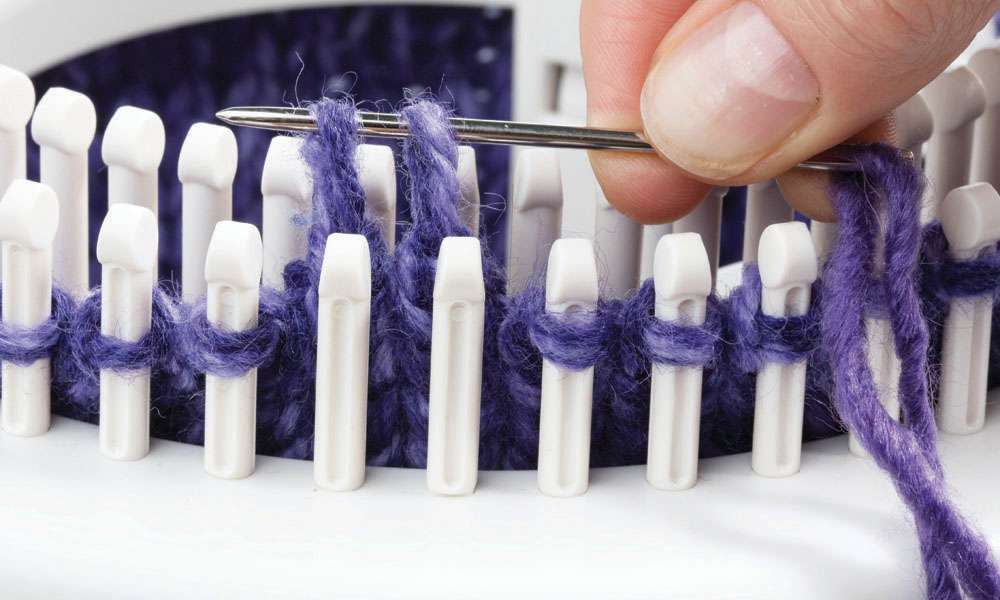 Continue process of skipping 2 pegs and picking up 2 stitches until you reach the end of the round.  Next, go around the loom again removing the remaining stitches. Cinch the top closed.  Weave ends in. 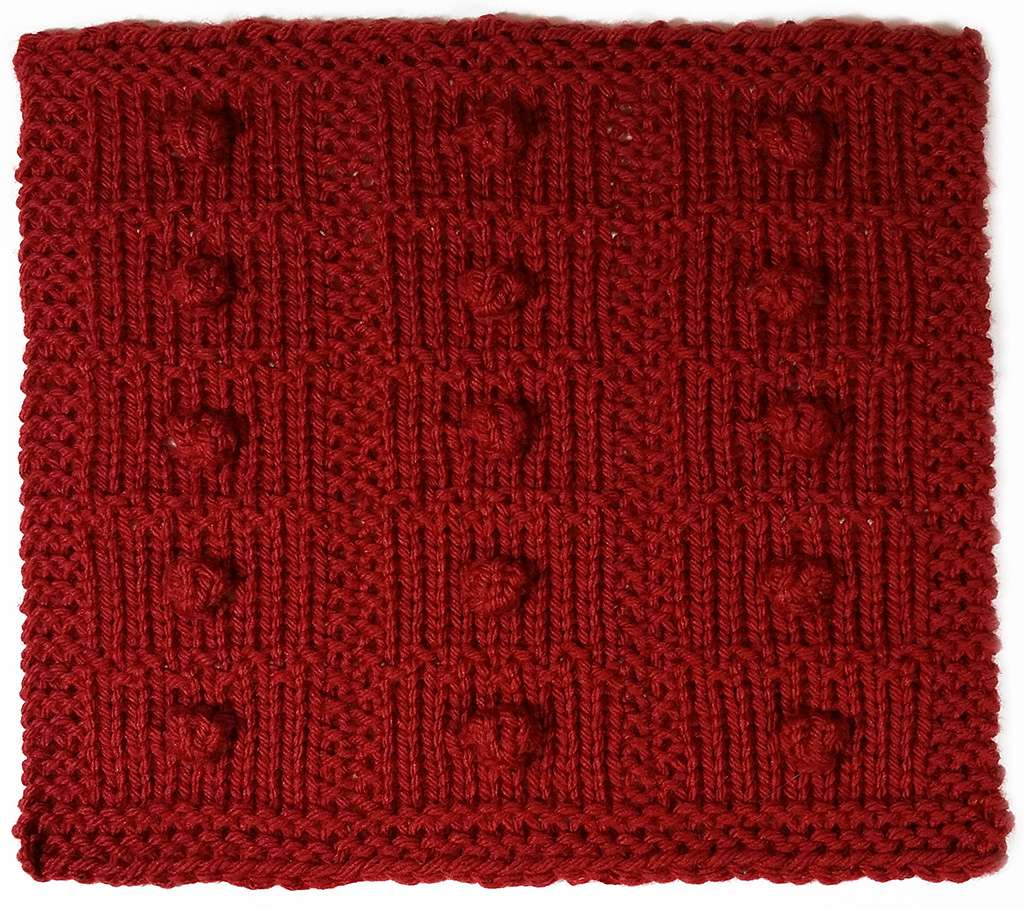 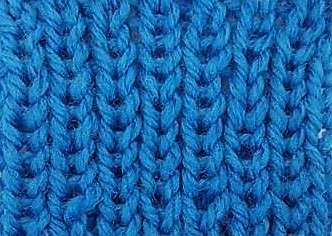 Loom FAQs: Is It Garter, Rib, or Seed Stitch? 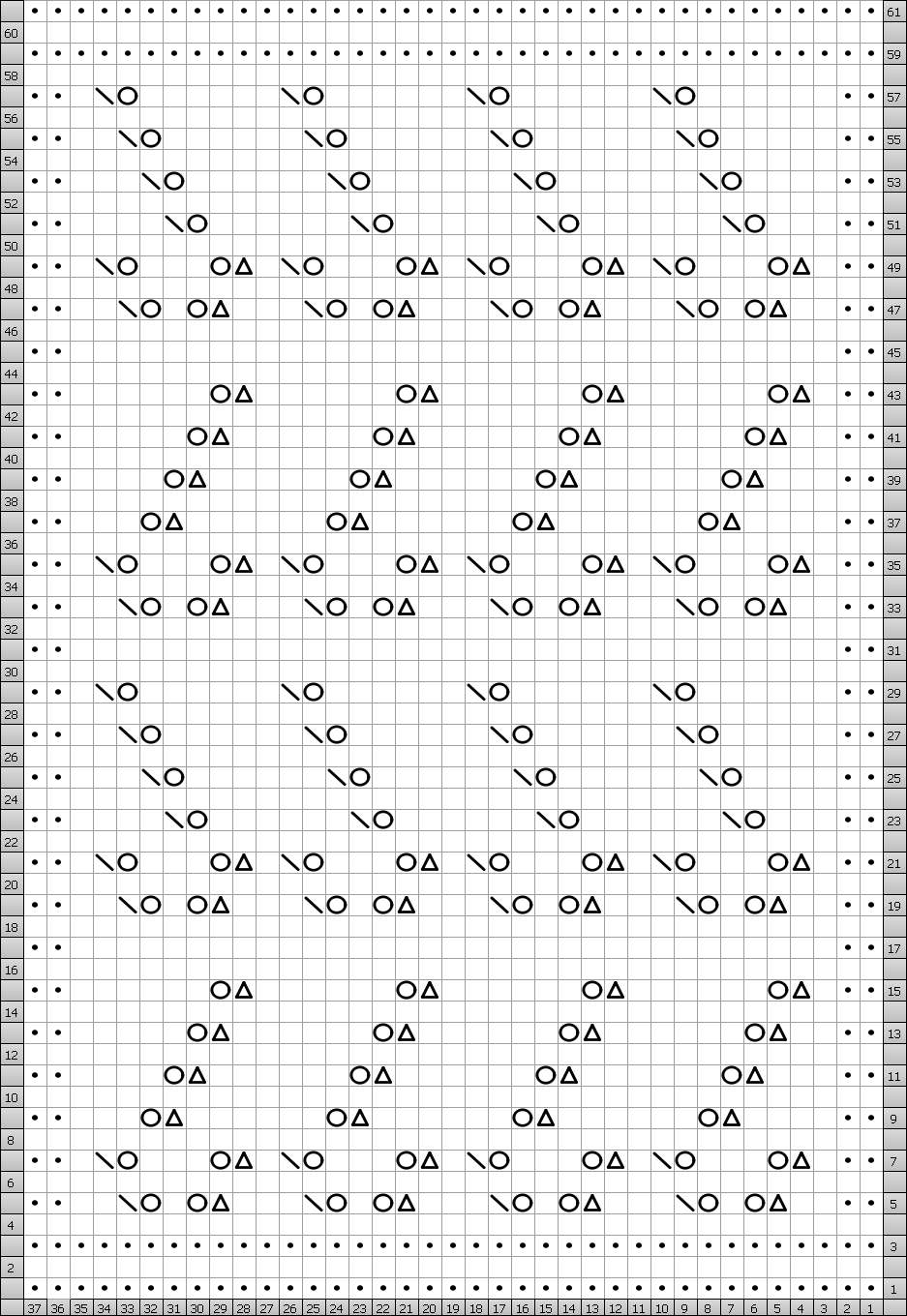 15 thoughts on “Double Knit ‘in the round’ Instructions”