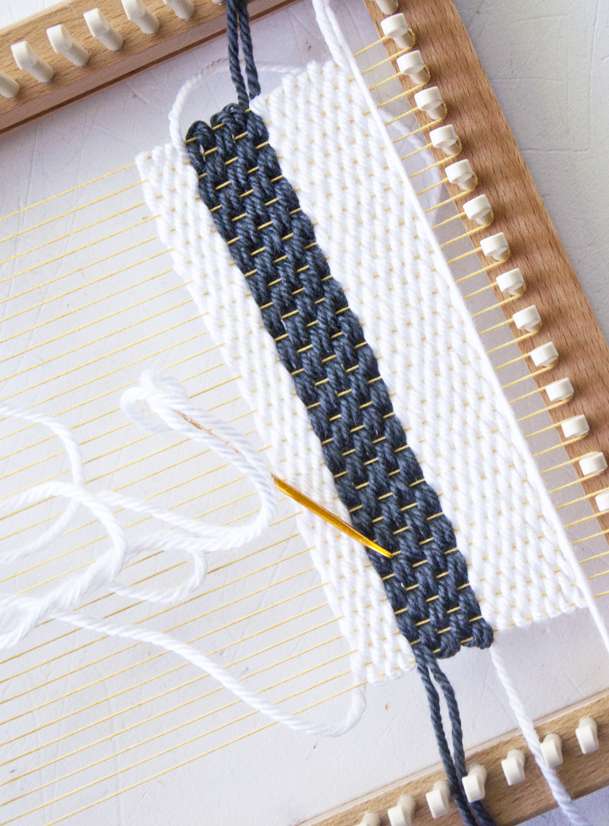 Weaving has made a huge comeback and there is no doubt that the reason is it’s so fun! We’re going to show you how to use your Knitting Loom as a weaving loom! In this part 1 instruction you’ll learn how to warp your Knitting Loom and how to weave the plain (tabby) weave. We shared how to finish a weave here.

Warp: The thread that is vertically wrapped around your loom, this is the backbone of the weave.

Weft: The thread that is horizontally woven between the warp threads, this is the design of the weave.

On the peg extender, count to the third peg and tie your warp thread in a double knot. 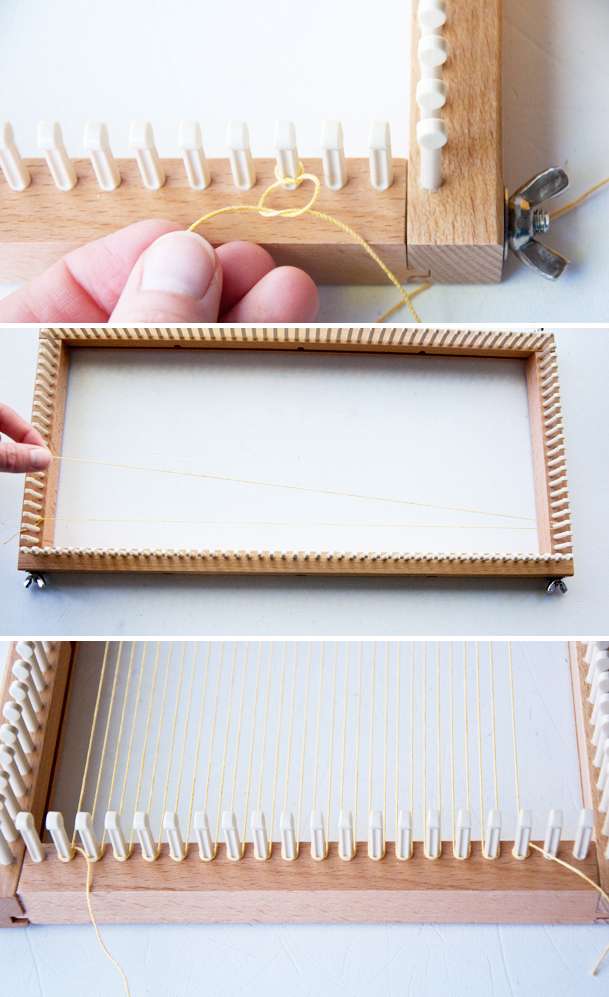 Bring the warp thread up and around the corresponding top peg, then back down.

It is important to keep an even tension as you pull the warp thread around the pegs. You want your warp thread to be pulled tight enough to not sag, but it should have some bounce to it. It should be similar to a strung guitar.

Then bring the warp thread down to the bottom peg that is second from the end of the extender where you will tie it off. Before you tie off the warp thread, check your tension, if the warp is sagging you can pull the warp around each peg to get it tighter as you work the excess towards your last peg. Once the tension is good, tie a double knot on that last peg and cut the thread from the ball. You will notice that both the start and end of the warp thread are tied at the bottom of the loom, this ensures you have warp loops at the top of your weave. You will have used 17 pegs at the bottom. 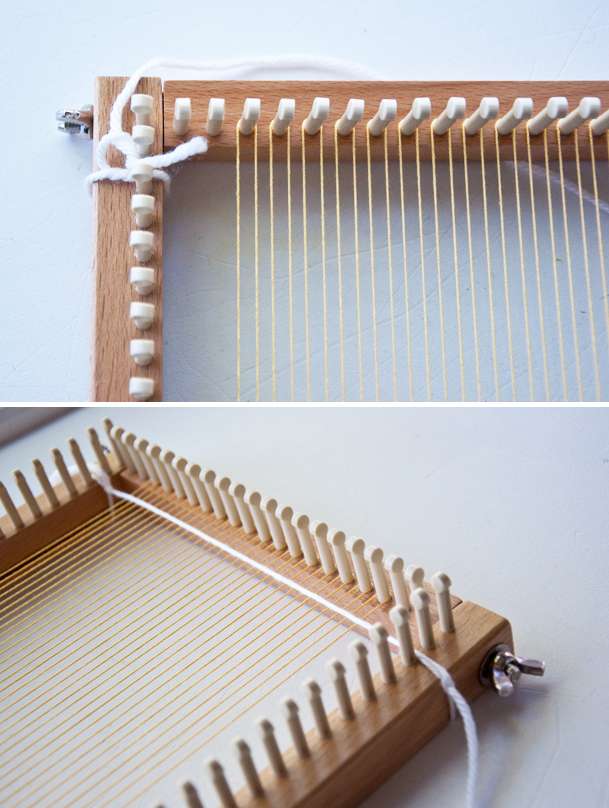 The plain weave is the basic over 1 warp under 1 warp weaving pattern.

Turn your loom so that the top with the warp loops and anchor string is closest to you (or upside down). We will weave top to bottom.

Cut a length of the white yarn to approximately 36 inches long. 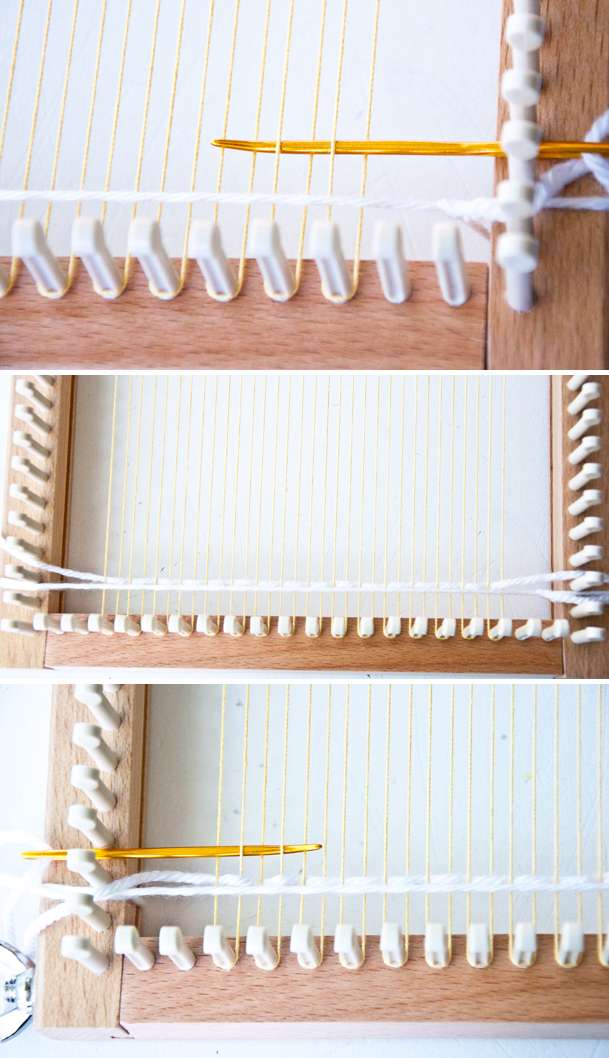 Using this length of yarn and a tapestry needle, start plain weaving by passing the needle over 1 warp thread, then under 1 warp thread, over 1 and so on. Repeat this all the way across your warp threads and pull your yarn through leaving a 3 inch yarn tail off the side of the loom.

Push your woven yarn down with the tapestry needle, so that it is next to your anchor thread.

For the return pass, weave your yarn in the opposite pattern from the row before it. I ended under the warp thread, so in the return pass, I will start weaving over 1 warp, under 1 warp repeating until I reach the end of the row. 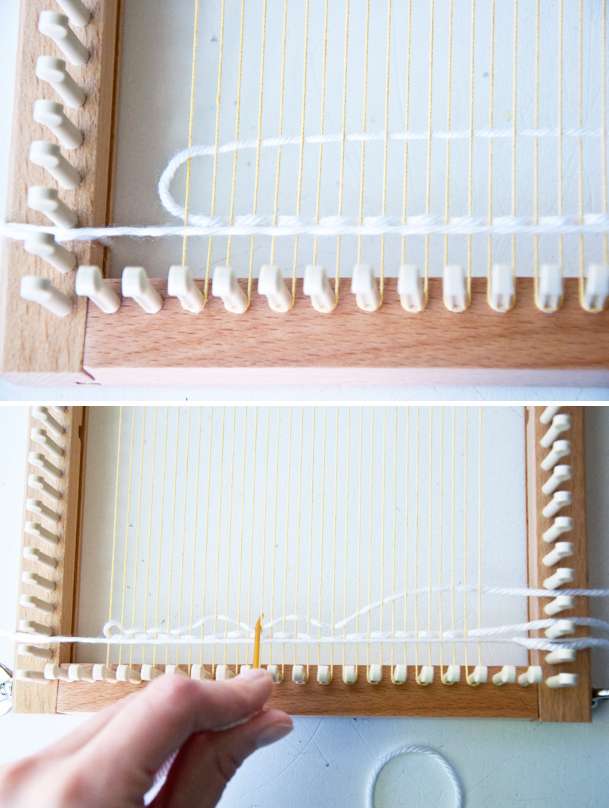 Pull your weft thread until you have a slight loop around the end warp. If you pull too much, your warp threads will be pulled into the middle and your sides will not be straight.

Using your needle, push the weft thread down to the other row. A good exercise is to create weft hills, as is shown in the picture, so that you ensure your weft thread isn’t pulling on the warp strings. Push all the hills down until the wefts are flat against each other. If the weft is too loose you can tug a bit on the yarn remove excess yarn from the row, but make sure your warp end stays straight.

Weave back in the opposite direction again, continuing the over 1 warp, under 1 warp pattern. Each row will alternate this pattern.

Once you are finished leave a tail of 3 inches off the side. 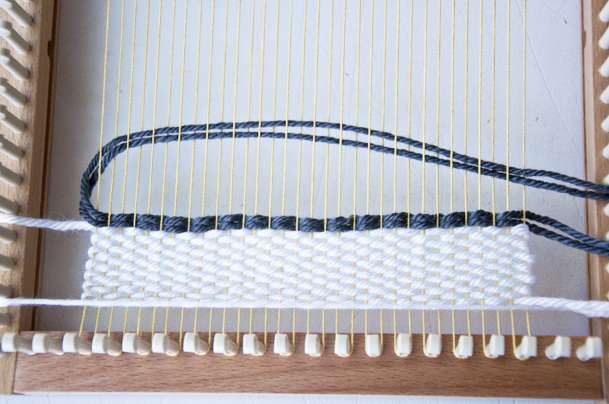 You can also weave the plain weave using more then one thread at a time. In the above picture you can see that two threads next to each other can be woven to add bulk. To do this, simply cut two threads of yarn and using the tapestry needle, weave both threads at the same time.

That wraps up Part 1, you can find Learn to Weave a Tapestry: Part 2 here and create a wall hanging with this beginner’s pattern!

Please let me know if you have any questions or comments below!

Kate from The Weaving Loom 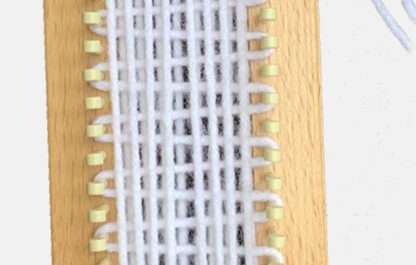 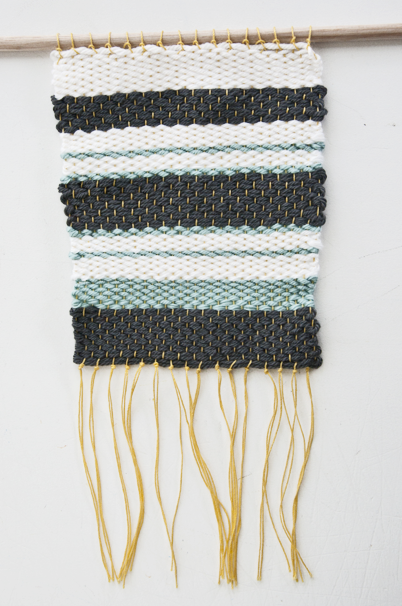 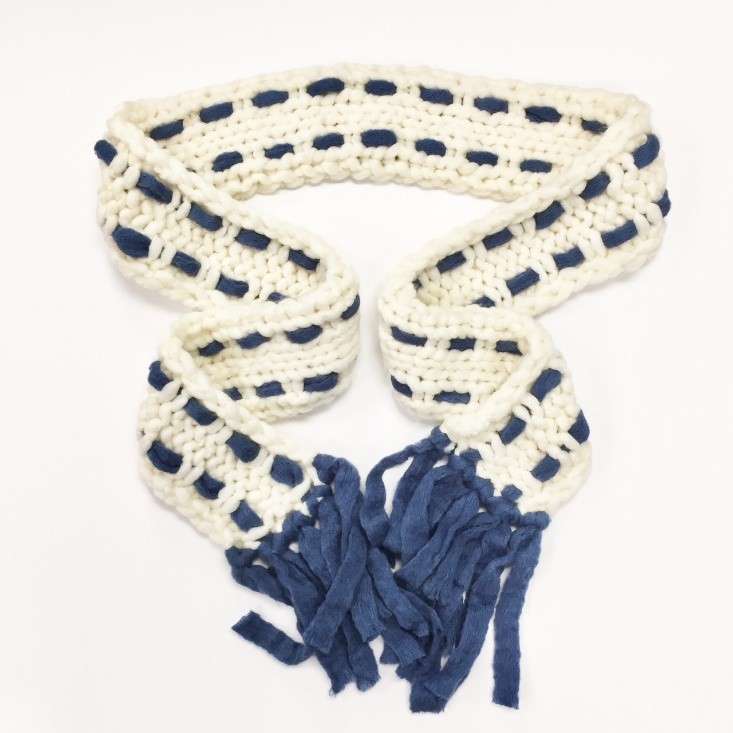 5 thoughts on “Learn to Weave a Tapestry: Part 1”