I really do not like weaving in the ends or tails after my work is complete.  But.  The one thing I detest even more that in knitting is knots. Despise them. Only time I do use a knot is to secure a gathered bindoff. And it’s a square knot all the way. But even then, I leave long enough tail to weave in. I don’t use knots to join a new ball of yarn or to change colors.   I don’t even place the slip knot on the first peg. I always cut out the knots in balls of yarn and treat the ends like joining a new ball. I always weave in my ends. Or as they say in the UK, I sew them in.

But every time I say this, I get the questions: Won’t the ends come out if not knotted? How do you secure the ends by weaving them in? Why do you not use other methods of joining yarn like the Russian join?

Let’s answer some of those and other questions about how to weave in those ends.

First let me answer that most pressing of questions: Why? Well, it is a very simple answer. Knots come undone. And when the yarn ends have been clipped too close to that knot, the work unravels. I have had more than one person that said that they have never had a knot come untied. Well I am not that lucky. Learned the hard way. And with more research as I developed my craft, I learned that the professionals do not use knots either.  Another “why” is I can always feel the knot in the work.  Drives me crazy.

Why not use the slip knot on the first peg?

Won’t the cast on row unravel if the slip knot is not placed on the first peg? No,  once the work is started, it will unravel.  Then that end is woven in as well.

Why not use other methods of joining like the Russian join?

When you use a Russian join, there is a section on each side of the join that is twice as thick as the rest of the yarn that will show on the work.  I have also found that the Russian join will not work on certain yarns.

Other methods of joining that are utilized by some all have some sort of drawback as well depending on fiber, thickness, etc.

Won’t the tails come out if they are only woven in?

If the ends or tails are woven or sewn in properly, the strand is locked into place and it won’t come undone.

How do I properly weave in ends?

Different people have different methods of weaving in the ends.  But it all comes down to the same concept:  the tail is woven in on a diagonal zig zag, or in the case of the garter stitch, replicating the stitch itself.

Yes, when I weave in the ends on stockinette, I weave them in on the wrong side of the work.  In order for it not to show on the right side, the end must be woven in on a diagonal.  I will demonstrate this one on the end tail.  Same method is used when joining a new ball or changing colors.  Just make sure that with the color change that the end is woven in on the same color. 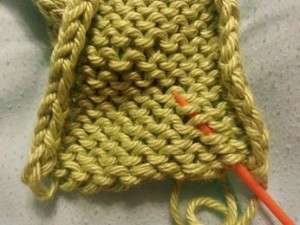 Just carefully catch the purl side stitches with the tapestry needle on a diagonal.

Then you will come back down on the same diagonal along side the first pass. 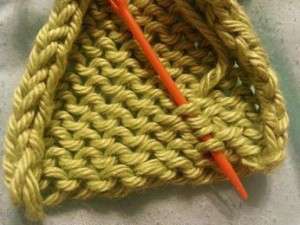 After a couple more passes, you have woven in the end. 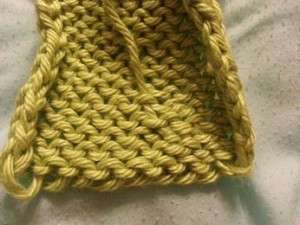 Now the end may be clipped.

This one I like to use on garter stitch.  The end is woven in duplicating the garter stitch.  I will show this one with both ends in the middle of the work where a new ball is joined.  Same method is worked for the end tails.

When joined in the middle of the row, there is a hole. 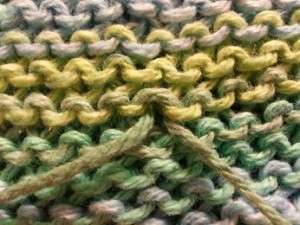 So the ends must be crossed to close up the hole when weaving in the ends.

First cross the first end across the other and bring the tapestry needle up through the next stitch. 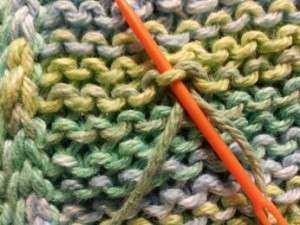 Then back down following the original stitch. 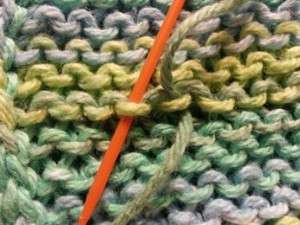 After a few stitches, start back the other direction on the row below or above.  Then repeat a couple of times. 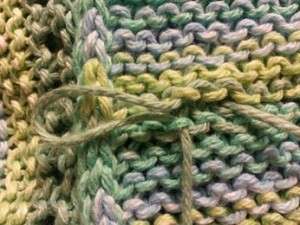 Then you will do the same with the other end going in the other direction. 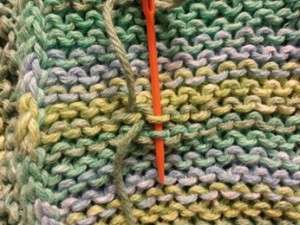 You can go down through 2 stitch to the next row down.

Once enough passes are done, the strand is locked into the stitches and will not come out and the rest of the tail may be cut off.

I am not an expert at weaving in ends.  There are other sites that give a more detailed or various methods.  These are the ways that I weave in my ends.  Which I don’t like doing…  But hate knots even more… 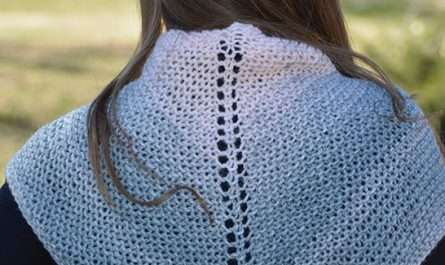 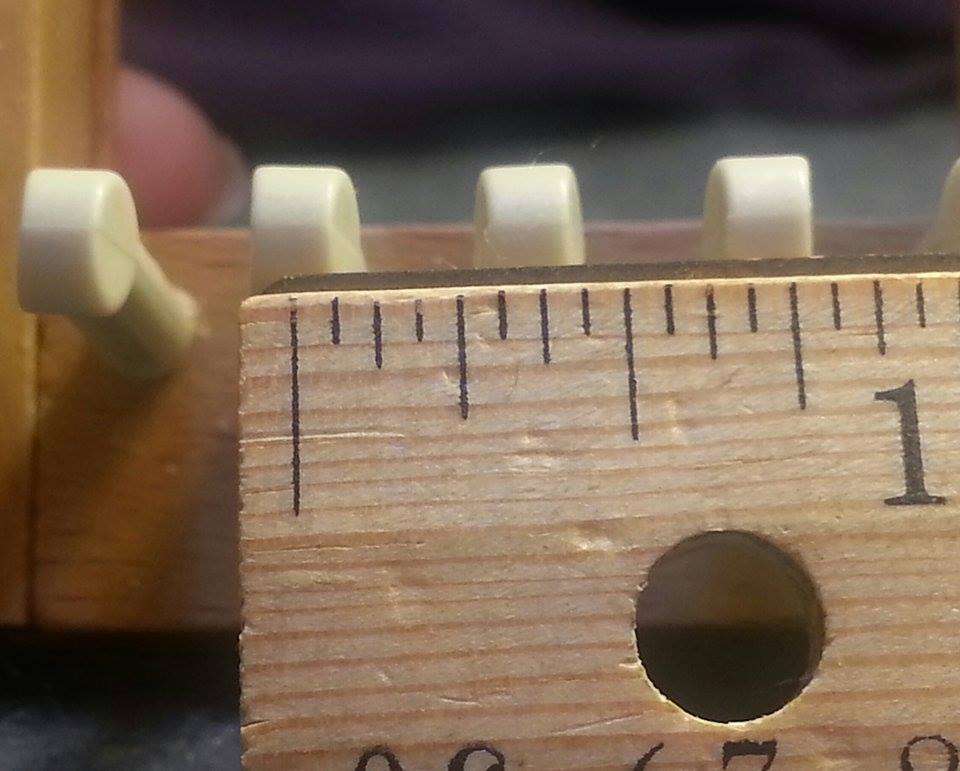 Loom FAQs: What Is Gauge? 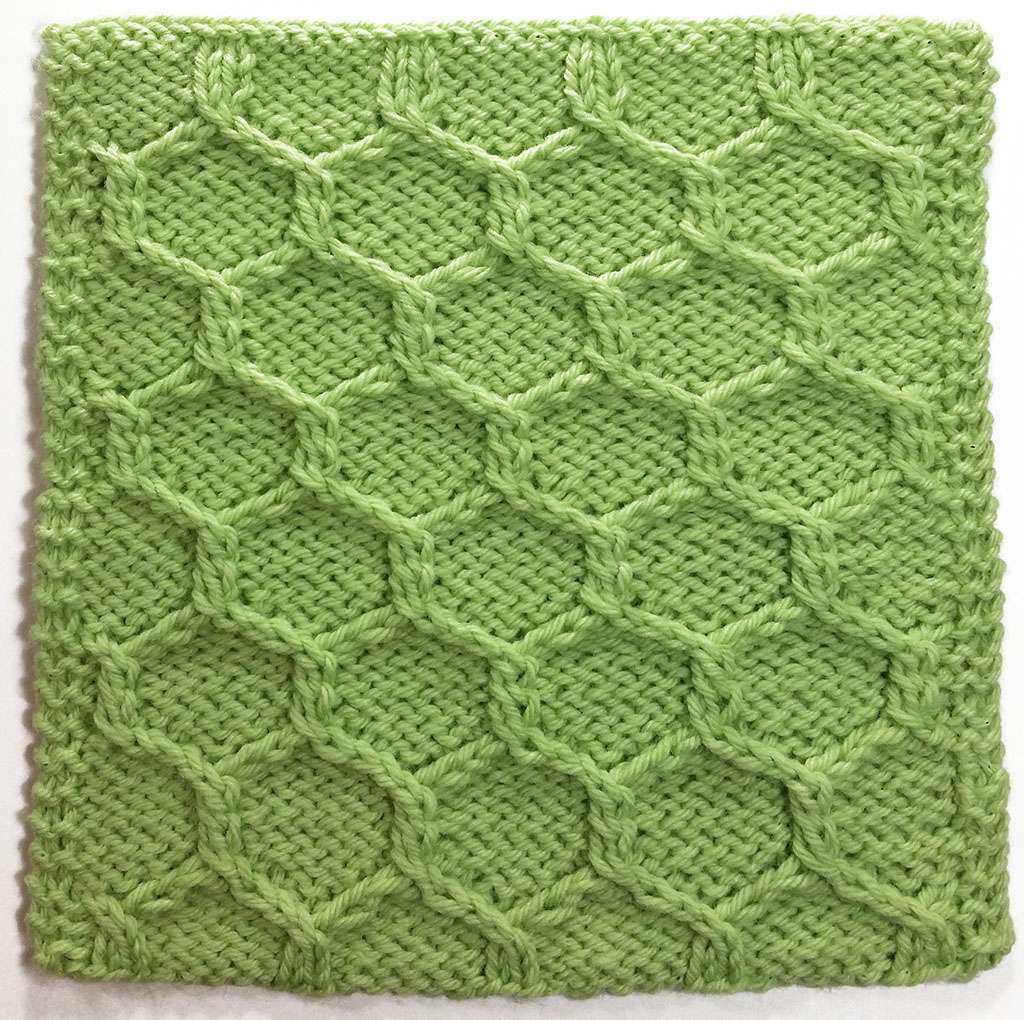 One thought on “Loom FAQs: Why Not Knots?”