Two questions I see often and seem to cause drama are What knit stitch do I use if the pattern doesn’t specify? and What is the difference between the different knit stitches?  But my favorite is Why are there so many knit stitches in loom knitting?  While it does seem like there are a lot of knit stitches, there are still only two.  Knit and e-wrap knit.  The confusion occurs because there are 3 ways to make a knit stitch.  And all 3 have different tensions.  So let’s discuss each one and then compare all 4 so we can put that drama to rest.

I will start with the e-wrap knit since it is usually the first stitch a person learns when he or she picks up a loom for the first time.  E-wrap knit is the loosest knit stitch.  It is taller and uses more yarn than a true knit or purl stitch.  It is a twisted stitch so the stitch looks like a y instead of the classic v of the knit stitch.  When worked in a flat panel, the e-wrap knit gives a great texture to the project since the stitches slant in the opposite way on each row. 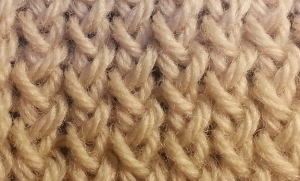 When worked in the round, the stitches will slant in the direction that you work. 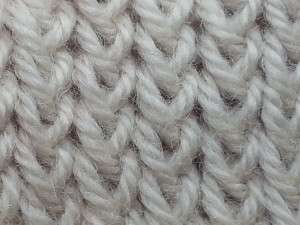 You make an e-wrap knit by bringing the working yarn behind the peg, around to the front of the peg, 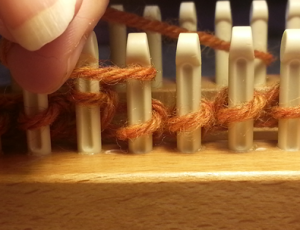 and then on around to the back the peg like a cursive e. 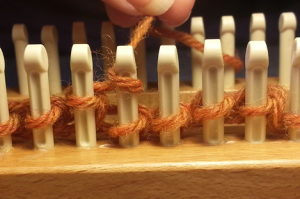 After the peg is wrapped, the working yarn is behind the peg again.

Then you knit over by bringing the bottom loop up and over the new loop you just made. 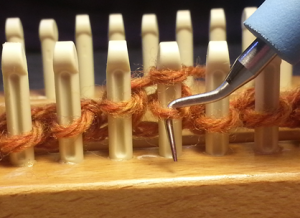 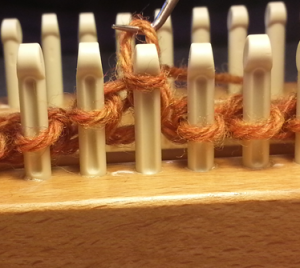 The knit stitch can be produced 3 different ways, and the size of the stitch varies with one.

Let’s look at the true knit stitch first.  It is also called the traditional knit stitch.  Some people call it a reverse purl even though it’s actually more accurate to call a purl a reverse knit.  It is the same height and width of a purl stitch and is best to use when working alongside purls in the rib, garter, seed, and moss stitches. 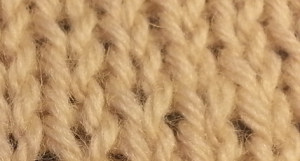 You make a true knit stitch by bringing the working yarn above the existing loop. 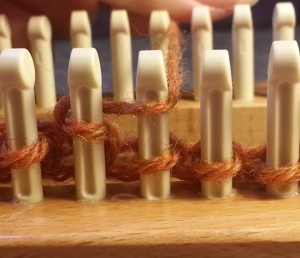 You bring your pick up through the existing loop and catch the working yarn. 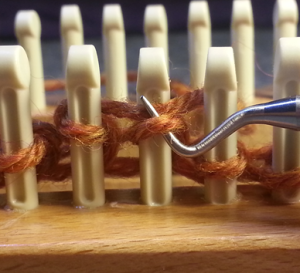 Then pull it down through the loop to create a new loop. 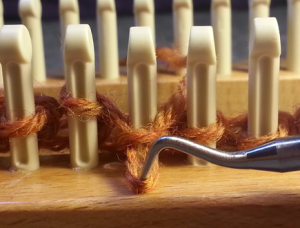 You then take the old loop off the peg. 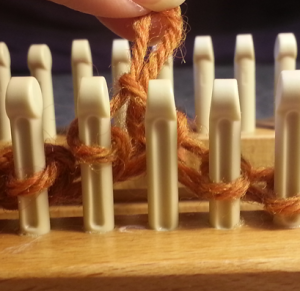 Then place the new loop back on the peg. 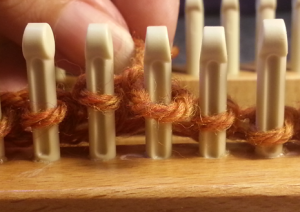 Snug up the yarn by gently tugging the working yarn. 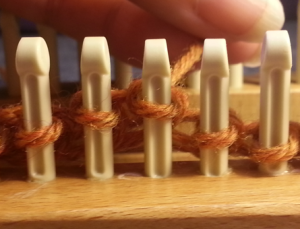 Why does this look just like a purl stitch?  This stitch is not to be confused with the purl.  While the motions appear to be the same, the purl is worked in reverse.  The working yarn is at the bottom of the existing loop, and the new loop is pulled up from the bottom before taking the old loop off the peg and replacing the new loop on.

Next is the u-wrap knit.  It is shorter and tighter than the true knit stitch. 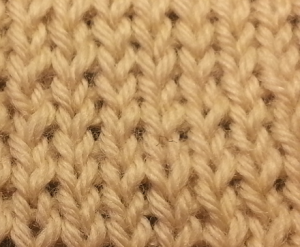 You make a u-wrap knit by bringing the working yarn above the existing loop in front of the peg and pulling it straight back behind the peg without completely wrapping it. 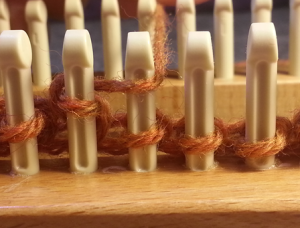 Then pull the bottom loop up 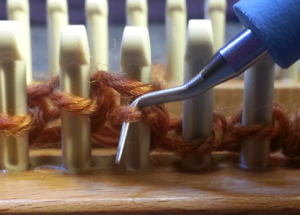 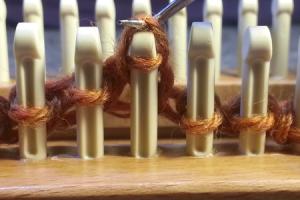 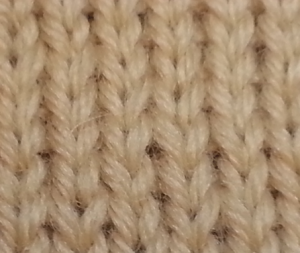 You work the flat knit by bringing the working yarn across the front of the peg above the existing loop without any wrap of the peg. 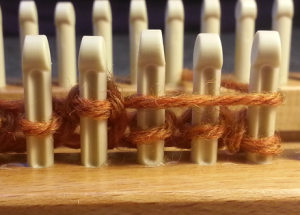 Then bring the existing loop up 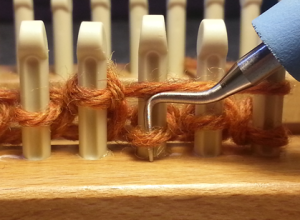 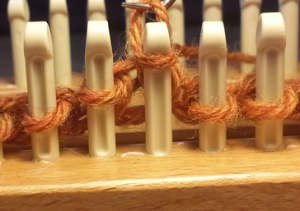 I worked 4 swatches using each of the techniques mentioned.  I made all 4 with 16 pegs on the Sock Loom 2 and worked 25 rows using KnitPicks Wool of the Andes worsted weight yarn.  I worked all 4 with the chain cast on and used the basic bind off.  I also slipped the first stitch on each row.

You can see the difference in size with the e-wrap being the largest and loosest and the flat knit being the smallest and tightest.  You can also see how the chain cast on (at the top) was not tight enough as the stitches got tighter and smaller.  You will need to take your cast on into consideration with whichever knit stitch technique you use.  I controlled my tension on all the swatches by not pulling on the yarn as I worked the stitches.  Each of them could have been made tighter by simply pulling and stretching the yarn. 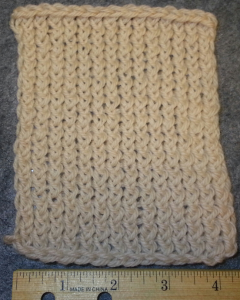 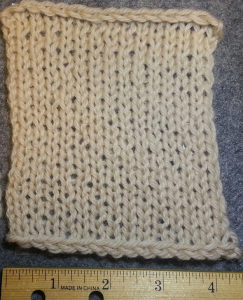 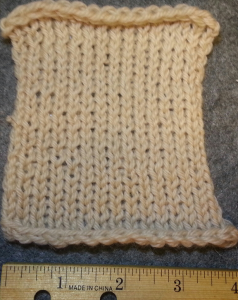 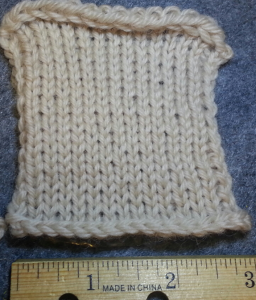 So as you can see, it makes a big difference in size depending on how the knit stitch is made.  Why can I not use e-wrap on every pattern?  Everyone’s tension is different.  If you were to make the same exact swatch I have, you most likely will have a different gauge.  Designers write their pattern for a certain look or size.  While you can interchange the knit stitch and the e-wrap knit in some patterns, most times it will change the pattern too much in size.  If using the knit stitch, you can adjust your tension by using a different knit stitch technique.  You can also adjust your tension on the flat and u-wrap knit stitches by loosening them as you work the stitches.  I loosen my u-wrap knit by simply pushing the stitch back with my pick after pulling the loop over.  But these swatches were made without loosening the stitches.  They were made as described above.

I hope this helps clarify the knit stitch dilemma and puts the drama to rest.

Loom FAQs – How Do I Read a Pattern? 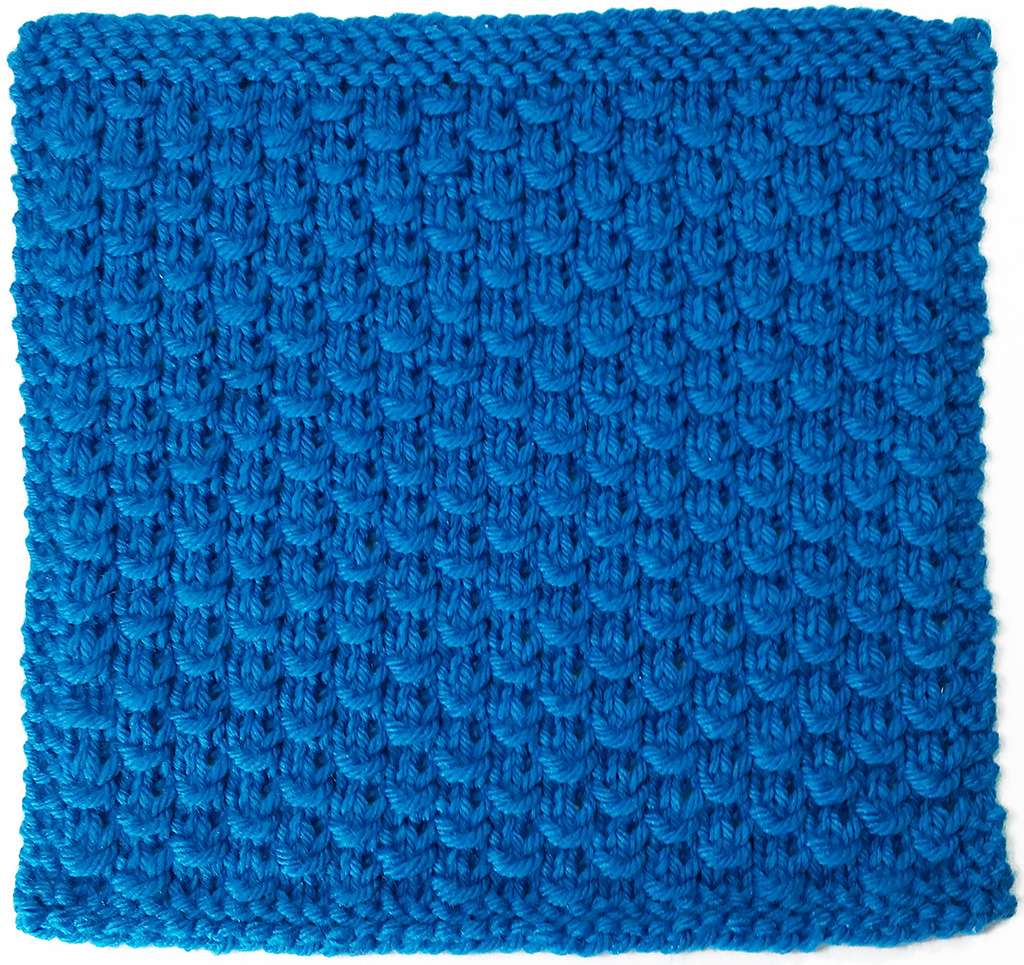